How learning programming languages can help make your life easier Gone are the days when you had to be an uber geek to know how, or indeed feel the need, to write a computer program. Many experienced and senior programmers today learnt to code the hard way during the advent and popularization of personal computers in the 80s and 90s, but the game has very much changed since then.

In this modern era, our lives are pretty much governed by the presence of computers; from the smartphone in your pocket to the television you watch tv shows on, and even the microwave oven that prepares your popcorn for you as you binge watch your favorite shows – there’s a type of computer everywhere, and as such it can (often) be programmed.

So why should you learn to program when your Google Assistant (or Siri) can maintain your calendar and Alexa can order your food for you? The simple answer; demand. Computer programs are replacing humans, and the demand is now for people who can write a program to do a certain task, rather than doing that task themselves. According to an estimate by the US Bureau of Labor Statistics, software developer jobs will continue to grow at a rate of 22% from 2012-2022, growing almost three times faster than any other industry.

The types of programming you can do

For people unfamiliar with programming languages, starting out can be really daunting. There are so many fields within programming, so many avenues you can explore that it is very easy to get caught up in a web and lose track of the original purpose.

At the lowest level are assembly languages, which are specific to each system type. Your personal computer typically runs on Intel x86 (or a similar architecture), whereas your smartphones are generally ARM-based. Assembly languages were popular back when personal computers were first invented, but these days higher-level language compilers have taken over that job. Beginners no longer need to learn assembly in order to program a computer.

A higher-level language provides a layer of abstraction over assembly interfaces, which means you no longer need to worry about machine architecture. C and C++ are perhaps the most popular and common programming languages that developers use to program machines. In fact, most computer science degree programs these days start with the basics of C and/or C++. That is because so many modern programming languages are based on C that this class of languages are referred to as C-style languages, and these include Java, C#, PHP, Python, JavaScript and so on.

While C is taught for basic to advanced programming concepts, it is entirely possible for beginners to skip it altogether and start off with a more modern language.

To really understand how learning a programming language can help, it is important to get some context with respect to how each system around us is programmed. Apps that you use on your smartphone are largely developed using Java (for Android) or Objective-C (for iOS). Desktop software is typically written in C/C++ (including Windows, Linux and macOS operating systems themselves) or C# (in case of Windows applications).

Any software or application typically involves more than one programming language. Languages such as C# and Java make up the core of a system; saving and retrieving data, making calculations, running algorithms and so on. But that’s not all – you also need to create pages, forms and interfaces for applications. That’s typically the job of a scripting language or a markup language, such as JavaScript or HTML.

Most of us spend a portion of our day surfing the internet. Web pages on the internet are written in HTML and CSS, which are markup languages. However, to bring interactivity to a webpage, such as displaying popups, showing animations, sorting data, playing or pausing a video etc. you need JavaScript which is a C-style client-side (or front-end) scripting language (not to be confused by Java, which is a backend language and something entirely different). Webpages can be static, relying entirely on HTML and JavaScript. However, web apps (where content needs to be dynamic rather than just static like a newspaper) need a backend or core language such as Java, C# or PHP for data and server-side processing.

This is where most beginners nowadays learn to program. A very common technology stack used for building end-to-end websites is HTML, JavaScript, PHP and MySQL. MySQL is a database provider that allows storing and retrieval of data.

A very popular and in-demand technology stack is Angular or React (for front-end) and C# or PHP as the backend. Angular and React are very recent frameworks that have grown to fame very quickly. They create JavaScript using advanced constructs in much the same was as C/C++/Java compilers create assembly.

On the web backend, the most popular languages used are PHP, Python, C# or Java. These languages are common across various platforms, and are essential to learn for any beginner. How Pair Programming Can Ensure Quality of Software Code
When it comes to software development, one of the most important decisions a company has… 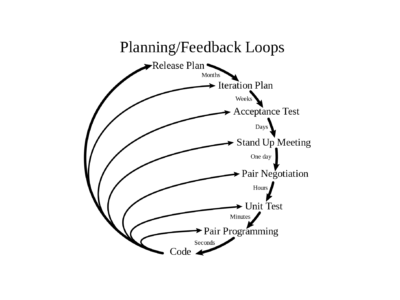